Whew. Another 10-win season for the Ohio State Buckeyes. Though not easy, the Buckeyes arrive at The Game with everything on the line. Really, the Big Ten East, the Big Ten Championship, and, just maybe, a potential National Championship all hang in the balance against that team up north. The stage is set for the final home game, and we all prepare, not the least among us is the usher of our 9-A section of the stadium, Mike D. Mike will be ready and waiting to host us and ride herd over the section.

Year in, and year out, the home game experience at The Ohio State University is a unique experience, and, the last game, every other year, with the football squad from "Up North" is perhaps the most memorable. The intention for the day is designed to make the game a traditional and memorable experience: programs in full color, tailgates in full swing with lots of food, drink, and friends, and, of course, the "Skull Session," the famous special pre-game band concert in time-honored St. John’s Arena.

A critical component of every game day is the usher. Today’s usher is, as always, Mike D. He has been the usher at gate 9A for years. He will remember you from game to game, and even, from year to year. He is the "host" of our section. Even for the first game in August, Mike greets you like an old friend. Mike remembers you like a bank teller remembers customers. No need to take out your ticket. If you are an inexperienced fan, he will guide you to the right seat. There are ushers, other Mikes, all over the stadium, but Mike is the shepherd of our section. He plans ahead and makes the game day a special experience for fans in Section 9A. Mike shares the experience as we move through the football schedule, moving, inscrutably, toward the final game with the team from the "Big House".

Early Saturday on Game Day, we gather like lemmings or sheep, again, to take the "game day" 2L COTA bus south, down to the Horseshoe for the game. Football critics who watched the Ohio State team battle Nebraska, Michigan State, and the final jarring contest with Maryland make arguments about the Buckeyes’ search for a renewed running game and comment on the special arm of Dwayne Haskins, the young OSU Quarterback.

Following an unlikely early loss to Purdue, dedicated fans looked forward to the games with stellar programs, Nebraska, Michigan State, and, of course, Michigan. Together, Ohio State, Nebraska, and Michigan hold a total of 24 National Championships in football.

Nebraska came to the game as a program "on the rise," guided by its new head coach Scott Frost. Frost was hired out of University of Central Florida where he was the head coach and led the UCF Knights (sometimes called the "Knightmare") to a 14-0 record in 2017. After the completion of the bowl games, UCF laid claim to the National Championship. UCF even had the audacity to put the title up on the inside of their stadium.

Nebraska, Michigan, and Ohio State are programs that notably reach into their own past to find coaches. Becoming the head coach of the University of Nebraska is a case of the "local hero" making good. Scott Frost is not without style and audacity himself. Born in Wood River, Nebraska, he was a Parade All-American in high school who chose to go to Stanford University to play football. Frost also won the state shot-put championship; no wonder he could throw the ball. He returned to the University of Nebraska for his final two years of college ball. Frost is, indeed, a local hero to the Nebraska Cornhusker "Faithful". As quarterback, Frost helped Tom Osborne win his third national championship in 1997.

Notwithstanding his Stanford years, Frost declares that "Like everybody who grew up in Nebraska, I bled ‘Husker Red’ when I was growing up." Frost’s return to Nebraska did not begin well. Nebraska started the season by losing its first six games before winning four of the last five, beating Minnesota and Michigan State.

Mike, the usher, was in Ohio State Scarlet for the Nebraska game. I was greeted to my 9A section seat by Mike D. For the game, Mike dyed a strip of red in the middle of the grey hair on the top of his head. 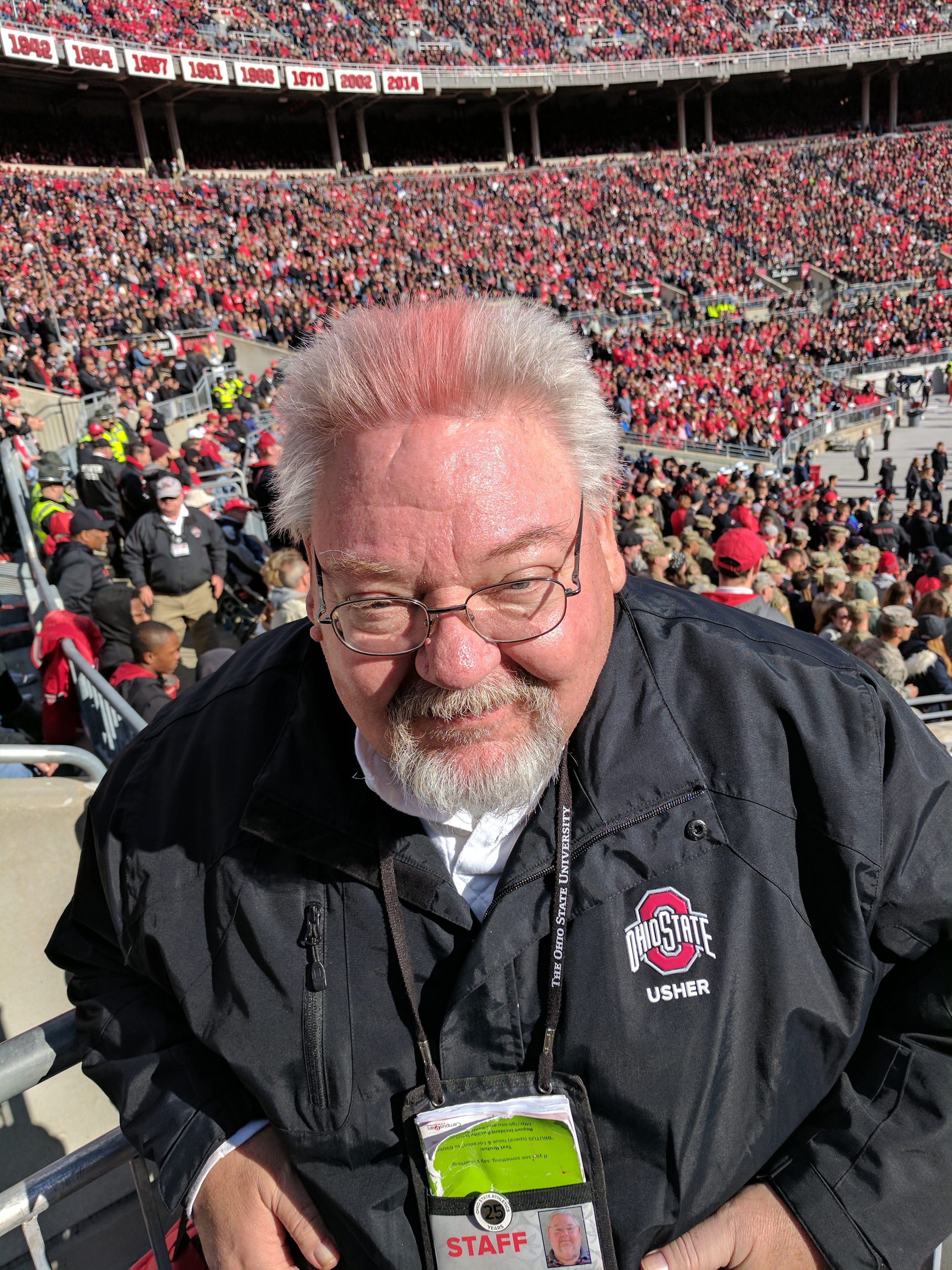 Like Frost, Mike also "bleeds red." "I dyed it, my hair, Mohawk Style," he said. Mike always meets the crowd with a hearty smile and a willing hand. Fans love to hand Mike their phones so he can take their pictures. Mike always takes time to do that. He has them stand with their backs to the field, the scoreboard in the background.

Fans were not so worried about the Nebraska game. The OSU band welcomed the Nebraska team and fans with the Nebraska song, which includes the words: "Dear old Nebraska U. Where the girls are the fairest and the boys are the squarest, Of any old school that I knew."

(Shortly after, in the traditional reversal, the OSU fans booed the Nebraska team as they came onto the field for the game.) After the OSU band seniors were introduced individually by name to the crowd, most of the 104,245 fans stood and sang "Carmen Ohio": "Time and Change will surely show, how firm thy friendship, O-H-I-O."

The game began ominously for OSU with a methodical Nebraska drive down the field for a touchdown. The Nebraska fans chanted "Go Big Red" and Nebraska went up 7-0. The game was on. Nebraska made some spectacular miscues. Nebraska suffered a safety on a missed block, the punt was blocked, and OSU scored a safety, 7-2. Then OSU marched and scored on a good pass play to put the Buckeyes up 9-7. Ohio State found its offense and J. K. Dobbins ran the ball into the end zone to extend the lead to 16-7.

The game with Nebraska was totally entertaining. The Cornhuskers came back to lead momentarily at 21-16. Perhaps the most memorable play of the game occurred when the Nebraska kickoff specialist slipped and just grazed the ball, leaving Oho State at midfield. Dobbins scored again and at the end of the third quarter, Parris Campbell scored for Ohio State, which now led 30-21. A comfortable lead. It seemed clear that OSU would be sufficient to win the game though Nebraska came back with a field goal in the fourth, making it 30-24. The game ended, 36-31. It was a tussle, all around.

As we walked out of our section, we stopped to talk again with Mike, the usher. Mike had been busy throughout the game, taking pictures of fans, handing out a program to the youngest fan, and generally entertaining the Buckeye Faithful. Mike is among the highlights of coming to a game at Ohio State, always remembering us as we leave, as though he is our host at the game. He rules the section, guides you to your seats, maintains civility and good behavior among the fans. He is there for the crowd. It is his job. He is there with a smile, a handshake, with his dyed hair and great mustache. Following a win against rival Michigan State 26-6, in a game that was much closer than the score indicated, and a troubling overtime victory over Maryland, it is finally the time for the great rivalry game with the team from "up north". Both Ohio State and Michigan are 10-1, each having a loss early on, each ranked in the top 10. The Holy Grail, the National Championship, is still there for the taking.

He looked at me and said, "Wait till the Michigan game, I’m going to dye the strip on the top of my head, like today (he tilted his head), and dye the lower tips of my mustache like I did for Homecoming." Mike looked strong and proclaimed, "Going all the way with that game."

It will be a game for the history books. Michigan has the most wins of any college football program. Buckeye fans know the story of how the indomitable Coach Woody Hayes always filled the team bus with gas in Toledo so he would not leave any Ohio State money in the state of Michigan. Certainly the ghosts of earlier days will be on the prowl on the sidelines during the game with Michigan; spirits past and present ready to pounce on the opportunity for a win in this crucial contest for each squad. Counterweighted by those moments in previous games, still, both teams have a legitimate opportunity to reach the Final Four. To paraphrase the famous Ohio writer Sherwood Anderson, "A doubt of the success" for the Buckeye team "hung heavy in the air" on our trip to the final game. For certain, Usher Mike D. will be ready to run his section. Against the team from "up north," Mike will don the full regalia.