The Ohio State Buckeyes has been dominant in their first three games, which should not be terribly surprising. What could be surprising to many is just how excellent the defense has played. After numerous question marks during last year’s run to the Rose Bowl, many were curious to see what the 2019 defense would look like under new defensive coordinators Greg Mattison and Jeff Hafley. So far, they could not have looked much better. The run defense, the most maligned aspect of the 2018-19 squad, has made a complete 180. They are only allowing 57 yards per game on the ground, good for fourth in the nation— a “bit” of improvement from the 158 yards per game of 2018. They’ve only given up 31 total points so far, with some of that coming against the second unit against FAU in Week 1. The nation, and the NFL, are taking notice.

Bleacher Report’s Matt Miller (@nfldraftscout on Twitter) recently released his top prospects list after three weeks. While no Buckeyes managed to land on the offensive side, two of the six defensive spots belonged to the Scarlet and Gray. Chase Young occupies the EDGE position, possibly the most important spot on the defense in today’s pass happy NFL, and it is a well deserved placement. Already, he has an absurd five sacks this year to go along with 9.5 a year ago. If there was any doubt that OSU would produce another top-5 EDGE rusher for the third time in five years, they were quickly silenced with his dominant performances thus far.

The other Buckeye to make the list was corner Jeffrey Okudah. While not someone who generally stuffs the stat sheet, the best corners are the ones that blanket their receivers so much they never get an opportunity to play on the ball. Okudah is definitely that type. Even still, he’s second on the Buckeyes in tackles and in pass deflections, showing he can do it all on defense. Beyond just his play on the field, his measurables also stand out; standing 6-foot-1, 200 pounds, he has 4.49 speed and a 41-inch vertical. NFL network Draft analyst Daniel Jeremiah said in the preseason that Okudah was more talented than any cornerback in the 2019 draft, and so far Okudah hasn’t shown any indications to the contrary.

“It’s kind of like going to recess and they have the first 85 picks.”

–Miami of Ohio Coach Chuck Martin on what going up against Ohio State is like.

It’s hard to disagree with the Miami RedHawks coach Chuck Martin here. OSU is the dominant powerhouse in the state of Ohio when it comes to football, which no one is shocked to hear. Kids grow up wanting to play for OSU, meaning the Buckeyes have their pick of the litter when it comes to recruiting these athletes. Unfortunately for everyone else in Ohio, that doesn’t leave much for their programs. It’s a big reason why OSU hasn’t lost to an in-state opponent since Oberlin in 1921, while the last time OSU went up against a state “rival” should still be fresh in everybody’s mind, a 42-0 drubbing of Cincinnati. The Buckeyes are 39.5-point favorites according to Bovada (at the time of this writing) against Miami (OH), and with OSU covering the spread easily the past two weeks, it should be a comfortable win for the Buckeyes. But football isn’t played on paper, and OSU will still need to show up and perform. While the Miami coach may be a bit blithe on his program’s status versus OSU, he will still have his guys ready to play, and what bigger dream could there be for the RedHawk players than to take out the Buckeyes on their home turf?

The RedHawks have a 1-2 record, coming off a loss to the aforementioned Cincinnati 13-35. Who, if you remember, were defeated quite soundly by the Ohio State. They will be led through the air by former NFL QB Blaine Gabbert’s little brother, Brett, and senior wide receiver Jalen Walker. On the ground, Davion Johnson and Tyre Shelton will meet the fortress-like OSU run defense that is currently fourth in the nation, only allowing 57 yards per game. On the other side, OSU will try to continue their record-breaking start on offense, with Fields accounting for four touchdowns a game and J.K. Dobbins coming off one of the best games of his career with a 193 yard effort against Indiana. The Buckeyes will want to end their non-conference schedule cleanly. On Ryan Day’s part, he isn’t letting the success get to his head, and is not overlooking Miami. In his pregame press conference earlier today, he even described some film of OSU “hard to watch” due to mistakes he is seeing. Regardless, Day said that as long as they have good practices today and tomorrow, they will have that to rely on versus anyone. Ohio State may not necessarily need their A game tomorrow, but Day will demand they play it anyways. 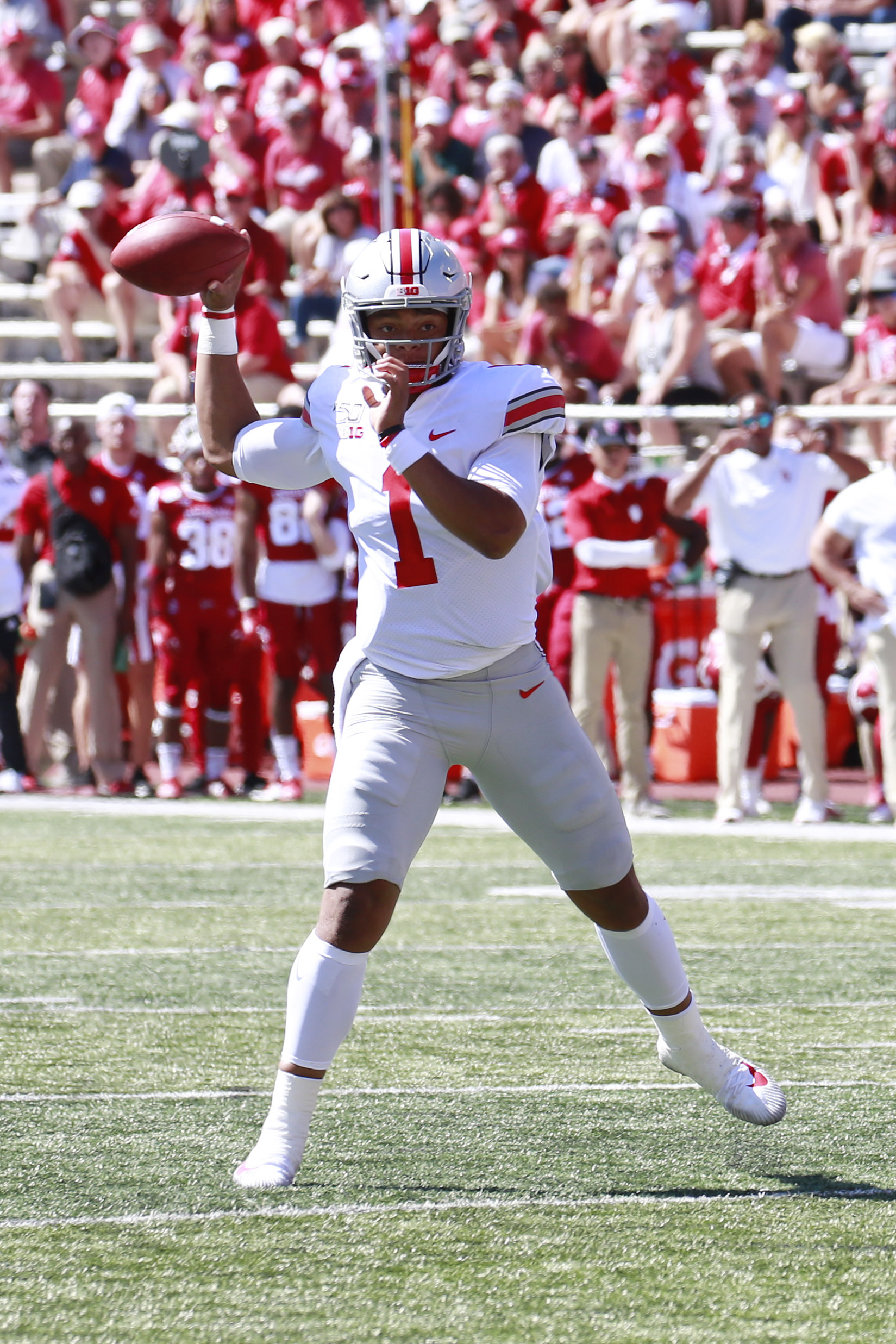 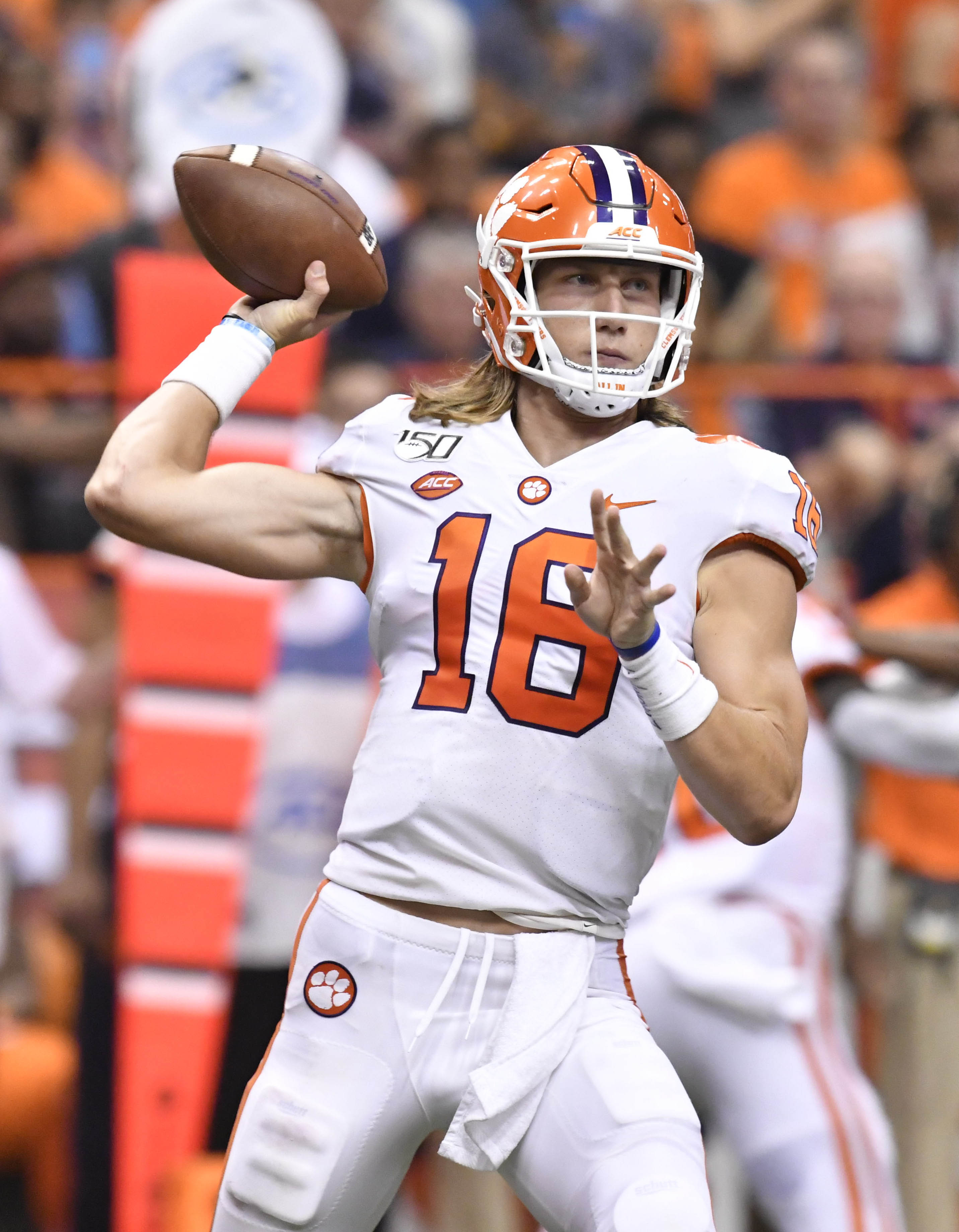 “Trevor’s a great quarterback, of course. We’ve been competing for a long time, but I try to not look at the outsiders and focus on me.”

For what will last their entire college careers, and possibly their future NFL one’s, Ohio State University QB Justin Fields and Clemson QB Trevor Lawrence will be intrinsically linked. They are both Georgians, who grew up maybe 30 minutes away from each other yet never got the chance to play, with Lawrence’s Carterville playing in class AAAA ball and Field’s Harrison residing in AAAAAA. But the comparisons between the two have always been there. They were the No. 1 (Lawrence) and No. 2 (Fields) prospects in the 2018 high school class, despite Fields taking home the Mr. Georgia Football award that year. They both went on to powerhouse schools, Fields staying home in Georgia, and Lawrence going a few hours north to Clemson. But it was Lawrence that would strike first in college. He won a College Football Championship as a freshman, showing so much poise in the dismantling of perennial champion Alabama that many thought he should go straight to the NFL. Fields on the other hand, was stuck behind Jake Fromm, seeing only spot duty and mop up procedures, stuck at home watching Lawrence taste the ultimate glory.

But it’s a brand new year, a brand new team (for one of them) and Fields has finally gotten a shot to prove that he is every bit the QB Lawrence is, and though early, he has shown all that and more. Lawrence has Fields beat in passing yards through three games. Fields owns every other category by a significant margin.

Per Means’ article, Fields has more touchdowns, less interceptions, a better completion percentage and an overall better passer rating by nearly 46 points. Lawrence has struggled no doubt, but only the biggest of OSU homers could have predicted the statistical heights that Fields’ has reached in his first three starts. Of course, it is far too early to say who the better QB is, or will be. But this year may be the first year these two QBs, who spent the majority of their football career 20 minutes away from each other, will be able to play against each other. And if they do, it will most likely have the highest stakes a game can have.