What game are you most excited for this season?

It’s not quite game week for the Ohio State Buckeyes, but if you pretend that this is just a bye week, you can kind of convince yourself that we are already mid-season, and you know what folks? That’s exciting.

In fact, in yesterday’s column, I spun forward the excitement that I felt from Saturday’s chaotic slate of college football games, and talked about five players that I’m excited to see get more playing time this season.

Column: Five players to be excited about getting more playing time for Ohio State

Column: Who do I root for when Ohio State’s not playing? I root for chaos, baby!

Thinking about those five players got me so excited that I decided that I am going to continue talking about the things that I’m excited about for the rest of the week; so get ready for me to type the word excited an obscenely large amount of times. You’re welcome, Buckeye nation.

So, today, I am going to rank the regular season games on the Buckeyes’ schedule from the games that I am the least excited about to the most excited about. Now, this doesn’t necessarily mean that I think that this is the actual order that the games will be in terms of how exciting they are to watch, but rather just the ones that I am most excited for in this moment, less than 12 days before the season kicks off.

Also, vote for the game you’re most excited about in the poll at the bottom of the article. I’d love to hear if you agree.

Illinois is not the worst team on Ohio State’s regular season schedule coming in at 65th in the latest SP+ rankings (Maryland is 87, Rutgers is 110), but the reason that the Fighting Illini has fallen to the bottom of my list is the fact that their head coach, Lovie Lee Smith, has gone and shaved off his perfect, beautiful, magical, inspiring beard. 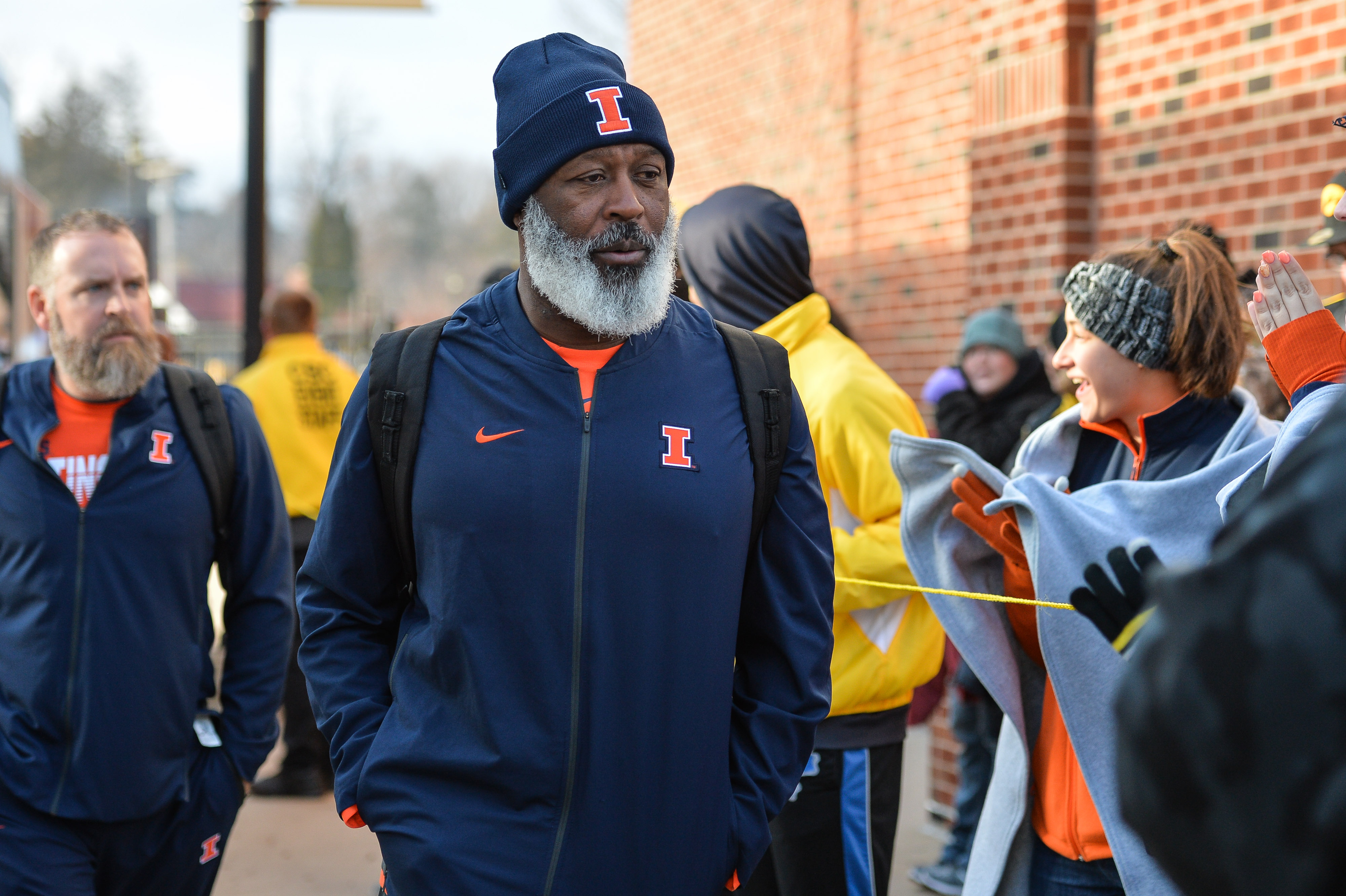 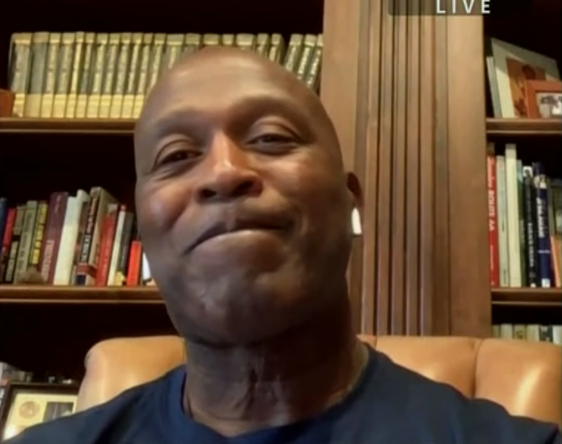 I have long been a fan of the Lovie Claus look, and cannot get excited for a game against the Illini without him sporting the chin curtain. However, since the Battle for the IlliBuck won’t be played until after Thanksgiving, I do reserve the right to move this game up higher on my list if Sir Loveland decides to grow the face fleece out as the season progresses.

Unfortunately, there’s just not that much about this matchup to get me excited. Although, it does have two things going for it:

The last time that the Buckeyes played at Maryland was in the painful, defensively challenged season of 2018, and though the Buckeyes limped away with a win, it might have taken a decade or 12 off of my life.

In the game, Terp running back Anthony McFarland Jr. went for 298 yards and OSU was an errant throw on a two-point conversion away from losing in overtime. Instead, the Bucks held on 52-51

Now, I am a fan of Mike Locksley, and I genuinely hope that he finds success at Maryland. But, I am excited to see if the Buckeyes can complete their turtle-specific revenge tour after beating Maryland 73-14 last year in Columbus. Personally, I would be very excited if the Bucks equalled the total points scored in the 2018 game all on their own.

I know that the Hoosiers are a trendy pick to move up in the B1G East, and lots of folks are pulling for a “Six Windiana,” but I legitimately think that they have the opportunity to finish third in the division this season. The Buckeyes didn’t get to see Michael Penix Jr. up close and personal last season, but he is a genuinely dynamic player at quarterback.

Despite injuries that only allowed Penix to play in six games last year, the Hoosiers finished third in the conference in total offense last year, and second in passing offense. I think that Tom Allen could have a really exciting offense on his hands if his stud QB is healthy for the entire, shortened season.

No matter whether the Huskers are your most hated rivals, or if you just consider them another johnny-come-lately in the conference, there isn’t a single Big Ten fan who is excited about this upcoming season who shouldn’t be thanking the University of Nebraska, its football coach, student-athletes, and parents for helping get the restart movement rolling. So for that reason and the fact that it’s the season opener, I am super excited for this one.

I also spent a great hour with our friends from Corn Nation’s “Big Red Cobcast” podcast last month talking about the growing friendship between our schools, what the season holds for both teams, the brutal schedule that the B1G handed the Huskers, and much more. So, I’m excited to talk to them when our podcast network returns next Monday.

Big Red Cobcast Ep. 329: Hugging It Out With Ohio State

While this one doesn’t have the rivalry weight of the two games that top this list, there is still more than enough about the season opener to get excited about.

Surprised by this one? As you’ll see in the next entry, I am open about my feelings for Penn State, but there is still no team that I enjoy Ohio State destroying every season more than That Team Up North. No matter how you define a rivalry, the Weasels are the McCoys to our Hatfields; the Elmer Fudd to our Bugs Bunny; the Voldemort to our Harry Potter. There is no day that is not a great day to either beat and/or troll TTUN.

And, after their head coach Jim Harbaugh and OSU’s Ryan Day apparently got into a bit of a dustup on a B1G coaches call back in August, the stakes have been raised even more with Day telling his team that they are going “hang 100” on their blue and yellow rivals in November October December.

Column: Jim Harbaugh is really weird, and I hope he coaches Michigan for life

I’m also super excited for this game because of the incredibly cool shirt that we designed here at LGHL. Our friends at BreakingT have this gorgeous, premium, lightweight, durable — yet ultrasoft — tri-blend crewneck available for purchase here. Buy a dozen now in order to get yours in plenty of time for Dec. 19.

And last, but certainly not least, I am very excited for The Game because I can’t wait for the Buckeyes to earn their ninth-straight pair of gold pants.

Despite the surprise that you might felt when you realized who was no. 2 on this list, this one should really need no explanation. The Nits are the biggest threat to Ohio State’s stranglehold on the Big Ten crown. This season, the Buckeyes are looking to claim their fourth-straight B1G title, and even without Micah Parsons, James Franklin’s team is likely to be the main — and perhaps only — legitimate contender capable of getting in their way.

That alone is more than enough reason for this game to be at the top of any list counting down exciting things, but there is definitely more in its favor than just that. We here at LGHL have long been on the record about our disdain for the team from Happy Valley. I’ve explained why I hate them more than TTUN, and the great Matt Brown gave you an entire list of reasons why you should hate them too (including Joe Paterno pooping his pants at The ‘Shoe).

Column: I admit it, I ‘hate’ Penn State more than I ‘hate’ Michigan

Why you should hate Penn State

So couple what should be the most competitive game of the regular season with an intense, deep-seated case of sports-hate, and factor in the fact that it is happening in Week 2 and the excitement level would already be through the roof...

This game will be played in State College, meaning that it likely would have been a White Out had the world not been hit by a global pandemic. So instead of the most raucous opposing environment that the Buckeyes would have played in this season, they will be taking to the same old field in an empty stadium just like every other one they’ll play in during 2020.

Any home-field advantage that PSU might have gained from their rowdy fans in the before times will now be rendered non-existent by the mostly empty stands.

Aw, that’s too bad, Nits fans. Better luck next year in The ‘Shoe.

What game are you most excited about in the Buckeyes’ season?

This poll is closed

After some unexpected start and stops, I am back to posting a column every single day from preseason camp until whenever Ohio State’s football season ends. Some days they will be longer and in depth, some days they will be short and sweet. Let me know what you think of this one, and what you’d like to see me discuss in the comments or on Twitter. Go Bucks!