You’re Nuts: Which Summer Olympic sport would you most like to see Brutus compete in?

Share All sharing options for: You’re Nuts: Which Summer Olympic sport would you most like to see Brutus compete in?

Everybody knows that one of the best parts of being a sports fan is debating and dissecting the most (and least) important questions in the sporting world with your friends. So, we’re bringing that to the pages of LGHL with our favorite head-to-head column: You’re Nuts.

In You’re Nuts, two LGHL staff members will take differing sides of one question and argue their opinions passionately. Then, in the end, it’s up to you to determine who’s right and who’s nuts.

Today’s Question: Which Summer Olympic sport would you most like to see Brutus compete in?

I am, at the core of my being, absolute trash for the Olympics. We’re not just talking a casual approach that includes primetime events. On more than one occasion, I have rolled out of bed at 2 a.m. to watch Winter Olympics curling or set an alarm for 5 a.m. to watch Croatian sailing.

So as you can imagine, it wasn’t easy to choose just one sport I’d like to see Brutus compete in.

After narrowing down my choices, I took the highly effective approach of a pro/con list to select the ultimate sport for Brutus to participate in, and I’ll have Matt know that this pro/con list is scientifically correct and completely indisputable.

Which Olympic Sport Should Brutus Play?

I won’t lie to you — I really wanted basketball to win this one for the Space Jam implications alone. The Tune Squad energy nearly convinced me.

My sick brain also strongly considered making a chaotic choice for the sake of my own personal entertainment. Brutus on a surfboard? That’s the exact level of insanity I requested in my “Be more like Gritty” column. But alas, there is nowhere for Brutus to train in Columbus as a surfer.

Column: We’re living in the age of Gritty, Brutus needs to act accordingly

And ultimately, if Brutus is representing Buckeye Nation on Team USA, I want him to make us proud. And so, the best Summer Olympic sport for Brutus to compete in is rowing.

Rowing requires tremendous physical and mental strength, but it also requires a certain build in order to really excel. Generally, tall people make better rowers and Brutus, according to his bio, can clock in anywhere between “6’0 – 6’9, depending on if it rains.” Male Olympic team rowers tend to be between 6-foot-3 and 6-foot-5, so Brutus can certainly fit himself comfortably within that range if the weather cooperates.

Rowers also tend to have high muscle mass, which we know Brutus does. Have you seen that nut do pushups? It requires endurance and strength, and Brutus has demonstrated that he excels at both.

From a mental perspective, rowers also tend to be an optimistic bunch who persevere in the face of challenges. Who better to bring this optimism and perseverance than a mascot, whose job it is to keep people hyped up even when the going gets tough? Brutus would know exactly how to keep his crew focused on smashing through to victory.

Another consideration in my selection was Brutus’ ability to train for his sport of choice in Columbus. The city offers ample indoor and outdoor spaces for Brutus to ramp up his training on and off the water. And though men’s rowing is not an NCAA-sanctioned sport, OSU offers crew as a highly-competitive co-ed club sport, so Brutus could train with them. In fact, former OSU Crew member Bryan Volpenhein is a three-time Olympian himself, taking home a gold medal in 2004 and a bronze medal in 2008. Surely the club is competitive enough to keep Brutus in top shape for the Olympics.

With absolutely no disrespect to the table tennis club, there’s no way they can help Brutus prepare to take on the best table tennis players in the world in the same way. When you really consider Brutus’ build, strength, and the training requirements for each of the Olympic sports, it’s obvious that Brutus should go for gold in men’s rowing.

Can you see how Jami purposely took multiple shots at my chosen sport, because she knew I was going with table tennis before she wrote her half of this column? That’s the kind of dastardly, manipulative maneuver that you would expect from someone who worships renowned con-artist Dolly Gallagher Levi.

You’re Nuts: Which musical theatre character would be the best to coach Ohio State?

But, despite her pros and cons list (and not so subtle cheapshots), there really is only one answer in this debate, and that is the game affectionately known around the world as ping-pong.

Like my colleague, I also had a number of options that I was considering. I initially thought that fencing would be a decent option, as not only are there multiple Buckeyes already competing for Team USA in the sport, but just imagining Brutus trying to fit one of those face shields over his giant nut head would have made me giggle. But, I quickly realized that I wanted to see that visual purely for personal entertainment purposes, and not for the betterment of Team USA or Brutus himself; so, I moved on.

Then I considered gymnastics. As Jami noted, Brutus is a very versatile athlete, and Ohio State has a history of turning out men’s gymnastic olympians. However, the more I thought, the more that I realized that there was one major reason that Brutus couldn’t be an elite-level gymnast: physics.

As someone who has a Ph. D. in physics (I do not have a Ph. D. in physics), I can tell you that the unbalanced weight distribution of Brutus’ head to the rest of his body would prevent him from completing — in an athletically pleasing way — elements that include a flip on any and all apparatae apparatuses. Therefore, I eliminated all gymnastics events from consideration.

Despite my disappointment, it was for the best, because then I landed on the only acceptable answer: table tennis. First, we all know that Brutus is monstrously athletic — after all, he is an anthropomorphised giant nut, technically he probably is an actual monster, or at least a Plantea-Animalia mutant.

Anyway, that’s beside the point. The real reason that ping pong is the perfect sport for this uber-athletic mascot is simple. Let me ask you a question. Off the top of your head, who is the most successful, elite table tennis player that you can name?

Struggling to come up with a non-fictional person, aren’t you? Ok, go ahead and go fictional. Did you come up with Forrest Gump? Of course you did, who else is there? You certainly weren’t pulling Ma Long, Wang Liqin, or Qiao Hong out of thin air were you?

But, when you think about it, Forrest really is the perfect answer, after all Brutus kind of is the Forrest Gump of the mascot world, so why wouldn’t he follow in his humanoid counterpart’s footsteps and pick up the paddle?

If Forrest Gump can transform himself from this: 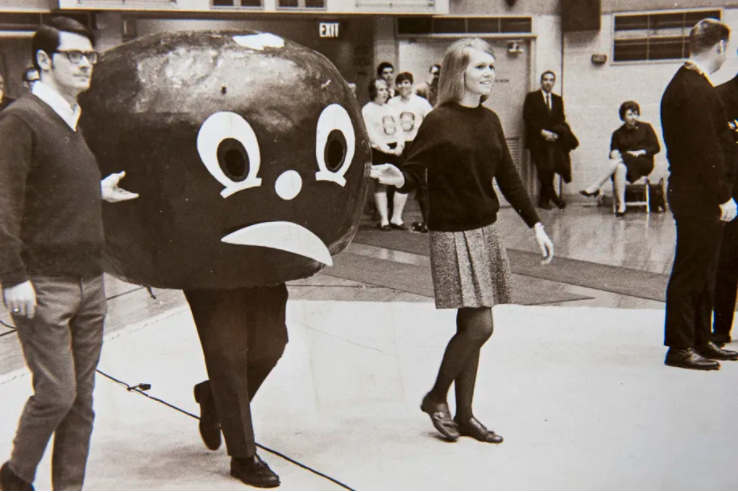 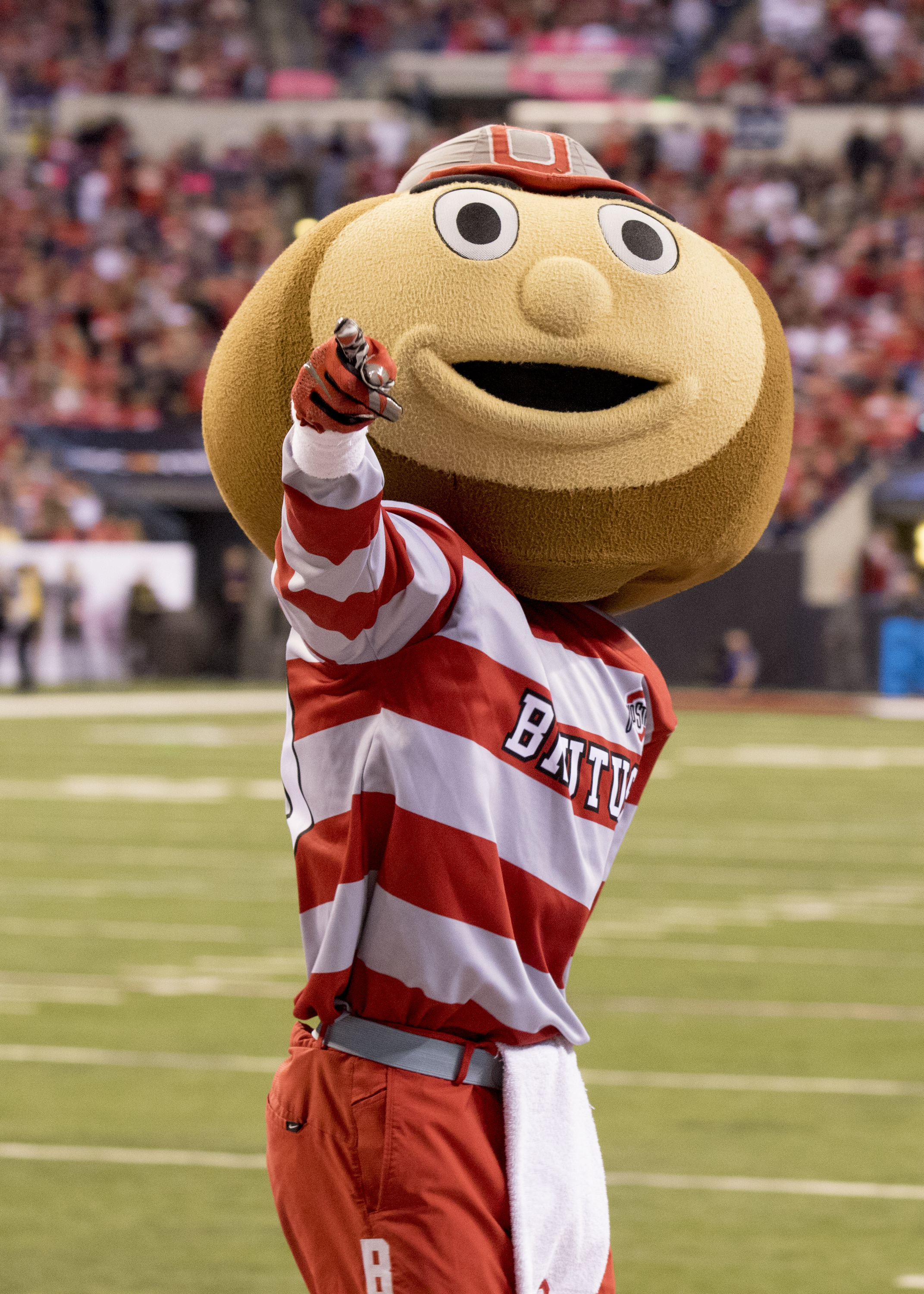 For generations, Brutus Buckeye has reinvented himself — much like Forrest Gump did countless time as well — while I don’t see this leading to him joining the military or buying a shrimping boat, there is no reason to believe that our favorite nut’s athletic ability would not allow him to follow in his spiritual sibling’s footsteps all the way to table tennis glory.

Which version of Brutus Buckeye is your favorite?

My Column: Sports Illustrated was embarrassingly wrong in their mascot rankings

Nonetheless, whether it is rowing, table tennis, gymnastics, rugby, or whatever else his nutty little heart desires, there is no argument that Brutus is the greatest mascot in the history of mascotdom, and can do anything that he puts his damn poisonous mind to, including winning gold in Tokyo.

Who has the right answer to today’s question?

This poll is closed