When MLB teams take the field on July 4th, they'll be outfitted with not only red, white, and blue caps, but also matching jerseys.

Major League Baseball and hat manufacturing company New Era officially released its Stars & Stripes line of caps on Tuesday afternoon, with every American League team, except the Rays, wearing a red cap with a blue bill and every National League team donning a blue cap with a red bill. When the teams take the field, they just might pair the lids with a star spangled jersey.

Select team stores on MLBShop.com leaked the corresponding jerseys, but when I reached out, an MLB spokesperson confirmed reports that the uniforms will not be worn on the field and are for retail purposes only. A close look at the schedule shows that uniforms match whether the team is playing at home or on the road, leading me to believe that that we will, indeed, see these uniforms worn by players this Independence Day.

Although not every team has made the jersey available for purchase, yet, you can get a look at the uniforms that were posted here.

As noted, the Tampa Bay Rays will not be wearing a red cap with a blue bill like their American League counterparts. Instead, they requested to wear the predominately blue cap because it matched their uniform better. 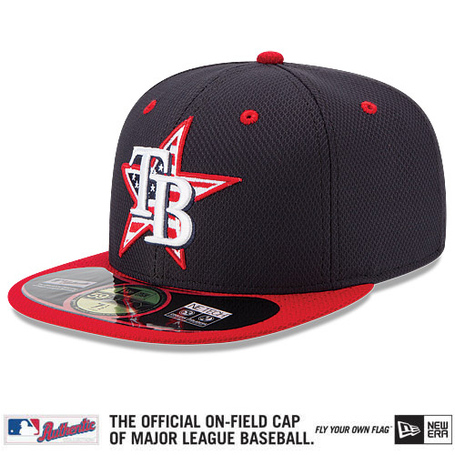 If the uniforms are, in fact, only for retail purposes, fans of teams without red or blue in their color scheme are in for an eyesore. Teams such as the Astros, Athletics, Giants, Orioles, and Pirates will see quite the clash of colors. Speaking of the Astros, many wondered how they'd design their Stars & Stripes cap since they already have a star in their logo. The answer: Starception. 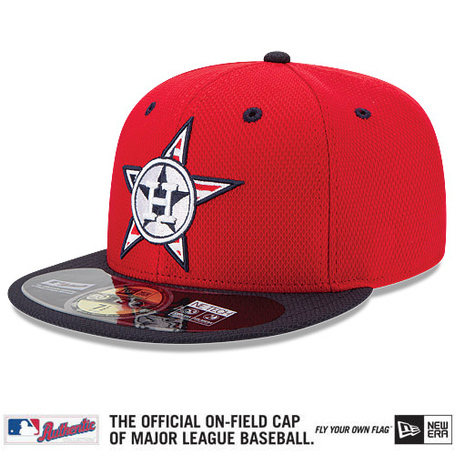 For the second night in a row, a National League Central team held Military Appreciation Night, as the Reds' camouflage uniforms made its on-field debut. The digital camo uniform uses the Reds script seen on past iterations of the team's batting practice uniform, and is expected to be worn for other select games this season. Cincinnati joins the San Diego Padres and New York Mets as the only teams in the Majors to sport a camouflaged alternate. 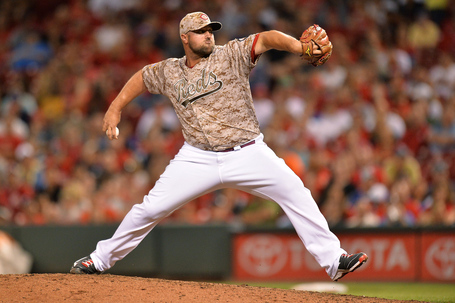 One of the teams to wear camo in the past few days, the Cubs are selling 1914 & 1929 Turn Back the Clock caps. While they did wear these caps on the field, on April 23rd against the Diamondbacks and again on May 4th against the Cardinals, I'm curious whether there is a market for a plain blue hat. 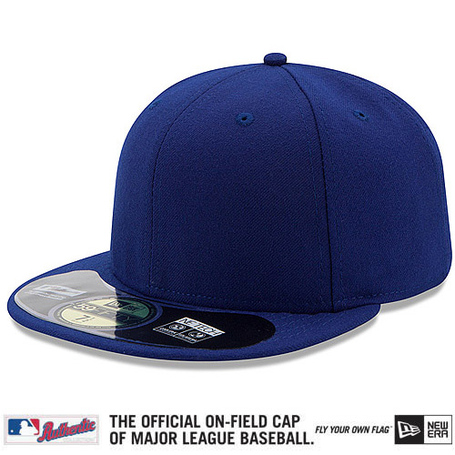 The Phillies will turn back the clock to 1964, against the Cubs no less, on Friday's Retro Night and again on Sunday as tribute to Jim Bunning's perfect game, which happened 50 years ago on Father's Day. Like they're forcing teams to do for Wrigley's 100th anniversary celebrations, the Cubs will also be wearing throwback uniforms for Friday's contest.

One team that looks best in their throwback uniforms, the Padres, received a lot of attention in last week's MLB First-Year Player Draft when they selected Heisman Trophy winner and Cleveland Browns quarterback Johnny Manziel. If he so chooses to play both sports, ala Bo Jackson or Deion Sanders, his new jersey is waiting for him in San Diego.

The Wisconsin football team tweeted a never-before-seen all-red uniform combination on Wednesday. During the photo shoot, the team noted that they now possess 20 different uniform combinations, although it's unlikely they'll all ever see the field. With the addition of black to one of their alternate helmets, I'd guess it's only a matter of time before a black uniform hits the rotation.

Haven't seen this look for #Badgers before... pic.twitter.com/gn1kcQeMVT

With only a few weeks until they've officially joined the conference, July 1st to be exact, newest (relevant) Big Ten member Maryland has been striking up billboards across the Baltimore area. The billboards are part of the school's "Think B1G" marketing campaign and feature athletes, faculty, and students.

There are now Maryland THINK B1G billboards on I-95, Greenbelt Road and throughout BWI http://t.co/PljxgyW1L2 pic.twitter.com/MqpcnamcW3

One week from today, June 19th, the Charlotte Hornets will reveal their uniforms for the 2014-15 NBA season. Rumored to have been designed by owner Michael Jordan's Nike subsidiary company, Jordan Brand, the uniforms will follow the lead of the team's logo, blending the franchise's old identity with a modern flair. We have learned that the white home, purple away, and teal alternate uniforms will feature a Carolina blue pinstripe or two, but the design process has otherwise been kept close to the vest. In addition, the new court design at Time Warner Cable Arena will be unveiled the following week at the team's draft day party.

Here's a bad crop job of upcoming events in the Hornets' transition. pic.twitter.com/EIpmqImceU

The FIFA World Cup begins today, and in case you missed it, SB Nation ranked the kits that will be worn in Brazil. Think you can design a uniform better than the manufacturers? You'll have adhere to strict guidelines when doing so, as FIFA created a 92-page equipment regulation style guide.