Share All sharing options for: Uniform Assessment, 6/13 - Rays, Astros to turn back the clock, blood-stained jerseys

The Tampa Bay Rays don't have a long history to reflect upon, seeing they've only been a franchise since 1998, leading the team to get creative when they "Turn Back the Clock". They've paid homepage to the Tampa Tarpons, University of Tampa, St. Petersburg Pelicans, and the Tampa Smokers, but have seemingly settled on a hypothetical design. When the Houston Astros come to St. Petersburg on June 21st, the Rays will be outfitted in the same navy blue pullovers and light blue pants they wore for last season's throwback game.

The uniform, which maintains the franchise's colors, but also captures the look of the 1970s, looks to be a part of the Rays' rotation for years to come. Meanwhile, the Astros will don their infamous "Tequilla Sunrise" uniforms for the second time this season. 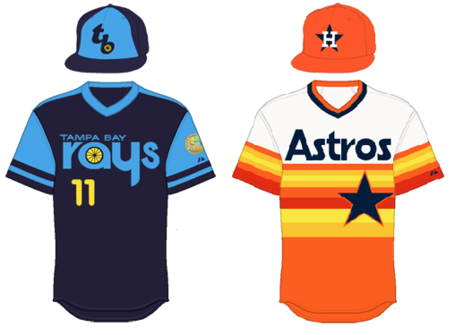 Creating fictional uniforms is standard in Minor League Baseball, where uniforms range from Star Wars-themed to straight out of the movie Ghostbusters. The Class A - Advanced affiliate of the Los Angeles Angels of Anaheim, the Inland Empire 66ers, took this to the extreme on Thursday when they hosted "Zombie Apocalypse Night". The promotion wouldn't be complete without blood-stained jerseys with tire tread sleeves.

The Chicago Cubs are giving away ugly holiday tees as part of their "Halfway to the Holidays" promotion on June 25th. The shirt features two different Cubs logos, as well as snowmen, moose, and other festive symbols. Between their on-field results and their tacky promotions, I wonder if they can be relegated to the minors.

Coinciding with the start of the FIFA World Cup, Under Armour released a line of shirts that combines the Superman logo with the flag of each participating country. It's only a matter of time before the Baltimore-based company decides to promote similar shirts with the Maryland state flag, cross promoting its brand and its founder's alma mater.

Let them know who you're rooting for. Shop the #UAAlterEgo Country Pride collection: http://t.co/xnjTqwBgwk pic.twitter.com/VVSiW1zGOp

Like corporate logos, including the "U" and "A" in Under Armour's logo, many sports logos have hidden messages or meanings behind them. Lost Lettermen compiled a list of 20 college logos that have a hidden image, abbreviations, or meanings.

Some, such as the number "11" in the old Big Ten logo, representing the pre-expansion number of teams in the conference, are widely known, while others have even slid under the radar. For example, the Washington Monument in George Washington's logo or the fact that shape of Oregon's logo pays tribute Heyward Field, site of the Prefontaine Classic, and Autzen Stadium, home to the football team.

The Pittsburgh Steelers will wear their 1934 throwback uniforms against the Indianapolis Colts in week 8 of the upcoming NFL season. This will mark the third-consecutive season that the Steelers will wear the uniform and eighth-consecutive season they've worn a throwback set. While many fans dislike the jersey, which resembles a bumblebee, the team cannot switch to another style until the 2017 season, as NFL rules state that a team must wear a uniform for five years after its unveiling.

Steelers will wear 'Bumblebee' throwbacks against the Colts on Oct. 26.

Contrary to what many believe to be a new Seahawks jersey, the following Instagram picture of Terrelle Pryor is nothing more than a bad photoshop. As noted for the Steelers, the Seahawks would have to wait until 2017 to change their look after unveiling their current set as part of Nike acquiring the NFL contract. Look closely enough and you'll see that the pictures uses his Raiders jersey, one of the teams that does not use Nike's Elite 51 template.

Finally, professional golfer Rickie Fowler honored the late Payne Stewart at the US Open with an outfit that that the former champion would have loved. Fowler teed off on Thursday morning sporting knickers and argyle socks, a perfect gesture towards the man who won the 1999 US Open at Pinehurst before passing away later that year in a tragic plane crash.

Fowler hinted at at the tribute earlier in the week on Twitter, showing his admiration of Stewart. The young golf star told reporters that he felt wearing the knickers would be a nice way to honor such a huge golf icon and that Stewart was someone he's always looked up to. 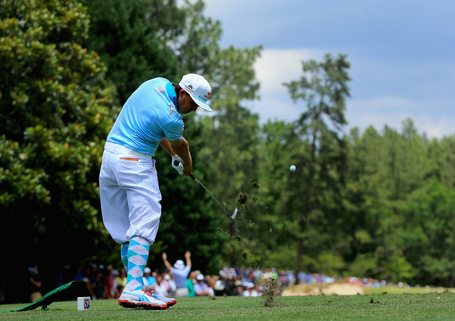 As the first week of Uniform Assessment comes to a close, I thank each of you for reading the column. We'll be back on Monday with a recap of the uniform and logo news from the weekend, but until then, stay tuned to @SBNUniforms for the latest updates. Any comments on how to improve the column or uniform tips, feel free to email us at uniformnation@landgrantholyland.com.