Several NBA teams will have new secondary and partial logos in 2014-15, while Major League Baseball unveils caps for the Home Run Derby.

With confetti still falling on the San Antonio Spurs, some teams have already moved forward to the 2014-15 season. The Charlotte Hornets unveiled new uniforms and the Houston Rockets released a secondary logo, but we've learned they're not the only ones with changes in store. The Philadelphia 76ers revealed a new secondary logo on Monday, which is a recreation of an older, less-used mark. The difference between the two variations of Ben Franklin dribbling a basketball, which debuted for the lockout-shortened 1999 season and was used in the 2002 All-Star festivities, is simply the color of the ball and the number "76" on his pocket.

It looks like the Sixers are adding a new DRIBBLING BEN FRANKLIN logo: http://t.co/rBxtj3RpqV pic.twitter.com/Zm6bfz7Vms

Shortly after the Sixers logo revelation, secondary and partial logos of a few other NBA teams were released. Friend of Uniform Nation, Conrad Burry, tweeted a picture of the alternate marks for the Boston Celtics, Golden State Warriors, Sacramento Kings, and another logo for the 76ers.

While nothing is official, I'm hearing whispers about the 2015 NBA All-Star Game jerseys. The rumor is that the uniforms will be a gray-scale version of the player's actual team jersey, instead of red and blue or host-specific colors. The game will be held in New York City at Madison Square Garden, while all other festivities will take place in Brooklyn's Barclays Center.

In a completely opposite move, Major League Baseball revealed the caps for this year's Home Run Derby. With the All-Star Game being played in Minnesota, the American League caps will be red and the National League's will be blue, similar to the 4th of July caps. The difference, however, is there will be no star and just the team logos, a first for the All-Star batting practice hats.

For the heavy hitters only. Introducing the Home Run Derby 59FIFTY: http://t.co/5FKwkzu4ny pic.twitter.com/5EYFDRhpN5

Game 1 of the College World Series Final pitted the Virginia Cavaliers and the Vanderbilt Commodores, who were decked out in patriotic uniforms for the second time this tournament. Vanderbilt's hats were very similar to the National League's 4th of July caps, save the red bill bill. Virginia, meanwhile, wore their home white jerseys for the series opener. 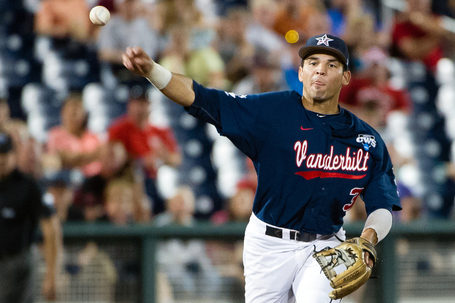 As if the Oregon Ducks didn't already have enough helmet options, the team released another on their Instagram account on Monday. Similarly to Washington's "unique frost texture", these helmets look as if they have the same painted ceiling look. This alternate helmet comes in addition to the candy apple green lid that a current player tweeted earlier this month. *Update: Upon further inspection, Oregon's white helmet is unlike the rest of the winged set and was already textured.

Essentially copying the alternate uniform fad, Akron head coach Terry Bowden tweeted a picture of the Zips' newest option. Almost a week ago, Bowden revealed a chrome gold helmet and new uniforms, similar to the mockups which were floating around for quite some time.

North Carolina State unveiled a new basketball court for the upcoming season, feature the beloved Mr. Wuf logo. The two-toned court is quite the upgrade compared to the old court at PNC Arena.