Photoshop allows us to imagine LeBron playing somewhere other than Miami, while EA Sports leaks another uniform change.

With four-time NBA MVP LeBron James opting out of the final year of his deal with the Miami Heat, becoming an unrestricted free agent, everyone is wondering where his next landing spot is. If he doesn't stay in South Beach, it's not hard to imaging what he'll look like in another uniform, as fans have taken to photoshop to impose King James into their favorite team's jersey. One LeBron fan even went as far as to photoshop him into every team's jersey, save for the newly unveiled Charlotte Hornets.

Like EA Sports has in the past, the video game company may have leaked another change for the upcoming season in its NBA Live franchise. In an article referencing graphical improvements from last year's installment to the latest version, images of the Portland Trail Blazers' new court were featured. The article also notes changes to in-arena lighting and player images. 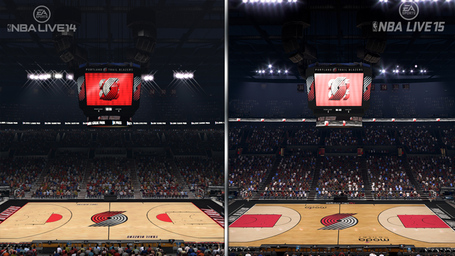 Murray State unveiled a new logo set as part of its athletic department's rebranding on Tuesday, which is quite an upgrade over the old mark. The program is recognized as the Racers in all sports except baseball, where they are known as the Thoroughbreds.

Check out the new primary and all new secondary marks as part of new branding package. #Racers pic.twitter.com/HhCmRjhVQJ

The Miami Hurricanes, who unveiled new uniforms earlier this offseason, have finally released images with the new ACC logo on their jerseys. The patch is much sleaker than last year's bulky ACC mark.

Likewise, Louisville is installing the ACC logo into the turf at Papa John's Stadium as the program changes conferences. Moving over from the American Athletic Conference, the Cardinals revealed what the ACC patch looks like on their jerseys when on a recruiting visit earlier this month.

Arkansas State head coach Blake Anderson tweeted some new helmet options as a recruiting tool. The Red Wolves have never worn the white, red, or black helmet with the wolf head, however, the white helmet sans stripe was an option last season.

To celebrate their 90th season, the New York Football Giants will wear a patch on their jerseys. The team also unveiled its uniform schedule for the upcoming season.

To celebrate their 90th season, the @Giants will wear this patch on their uniforms this year! pic.twitter.com/V5euBsuiB1

View some of the other patches & logos the Giants have worn throughout their history: http://t.co/JYQ7a9TMys pic.twitter.com/hqGAGfL9bR

As part of Cancer Survivorship Day, the Los Angeles Angels of Anaheim wore headscarves during pregame batting practice. In partnership with St. Joseph's Health, the players recognized those who have survived the disease, but honored those no longer with us.

The Lehigh Valley Iron Pigs, known for their bacon-covered uniforms, will honor the King of Pop on July 24th when they don jerseys resembling Michael Jackson’s outfit in the iconic "Thriller" music video. This past weekend, the team wore Batman-inspired uniforms.

Its Human Nature to Wanna be startin somethin in these @IronPigs Thriller jerseys. Itll be tough to Beat It on 7/24 pic.twitter.com/DDAjBIapIz