Kits worn in international soccer competitions, such as the World Cup, are subject to strict guidelines by the Fédération Internationale de Football Association (FIFA). Everything from type sizes to logo placement on the players and what the referees and coaches can wear is covered in the 92-page Equipment Regulation style guide. According to FIFA, the purpose of the document is "to allow the manufacturers to enhance our sport through aesthetic creativity and design...in return, those parties are expected to follow the rules." A peek into those rules shows that designing a uniform that both players and fans of a country, alike, will be proud to wear is tougher than you may think.

Simple enough, FIFA states that the playing equipment, which comprises of a jersey or shirt with sleeves, shorts, socks, shinguards, and footwear, may consist of no more than four colors. Adhering to the same rule, as well, the goalkeeper must clearly distinguishable from the players on both teams. Before competition, teams must inform FIFA of two kits: one predominantly colored and one predominantly white. One of those kits are designated the official kit, while the other is defined as the reserve in case of clash between teams. Likewise, the goalkeeper will provide three different colored kits to wear throughout the competition, as the possibility for clashing is greater.

The numbers and letters used on the uniform to identify players are subject to far more complex rules, as they must fit within a certain template. Numbers on the back of the shirt must be centered and between 25 cm and 35 cm in height, as well as between 3 cm to 5 cm in thickness, while the numbers on the front of the shirt and shorts must be between 10 cm and 15 cm in height. Numbers can be applied to either leg of the shorts. 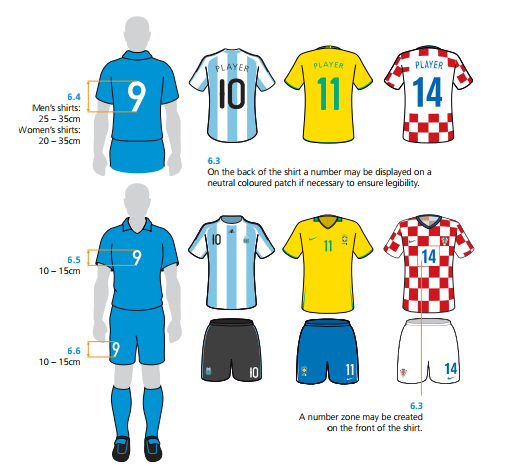 Unfortunately for companies such as Nike, which prides itself on iridescent or chrome numbers, equipment may not be made of reflective material or change color or appearance due to lighting or water and must be distinguishable from the rest of the kit. If a number were to clash with the rest of the uniform, a squared number zone would be created on the front and back of the shirt.

Another form of identification, the player's name, follows a similar rule in that it must be in contrasting color to the shirt. The player's name, which must be positioned at least 4 cm above the number on the back of the shirt, must be between 5 cm and 7.5 cm. 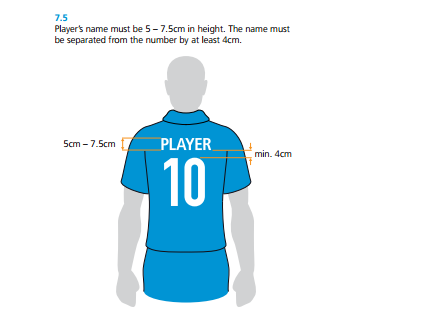 In addition, both the names and numbers appearing on the shirts or shorts must be permanently sewn or ironed directly onto the uniform, and no player with temporary means, such as Velcro, will be allowed in the competition.

Uniforms are allowed a decorative element, such as sublimated stars and stripes on a United States kit, but only if it does not dominate the shirt or shorts and/or limit the ability of a player. As long as the decorative element does not give the impression of a manufacturer's identification, a religious or criminally affiliated symbol, or any registered trademarks, FIFA will sign off on the design.

Another guideline the kit must follow is that each sleeve, no matter the length, must keep a 12 cm by 8 cm free zone for FIFA specific badges. This is where the World Cup logo will be placed. 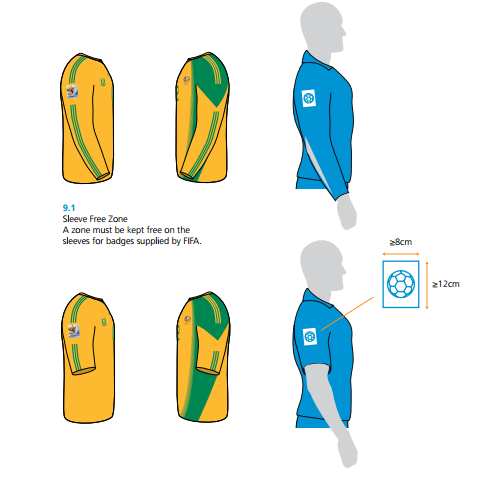 On the front of the shirt, the country can place an identification no more than once, whether it is the official member association emblem, mascot, flag, name, or nickname. The identification must be positioned at chest level and must not interfere with the legibility of the number. The national flag may be placed on the sleeve opposite of the free zone or on the back collar of the shirt. 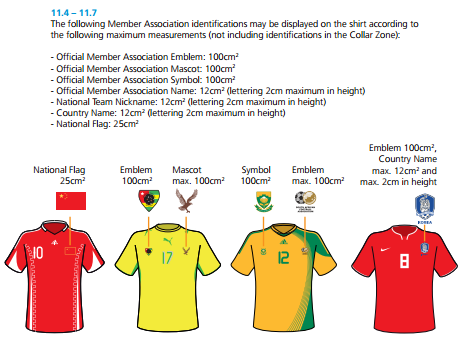 The identification may also be placed at the bottom of each number on the back of the shirt.

Likewise, the shorts can use an identification (flag, emblem, etc) no more than once and be place only on the front. In addition to the rule, a flag can be placed on the front waistband of the shorts. Member identification must be on the opposite side of any manufacturing logos and numbers and vary in measurements, depending on the form of identification. 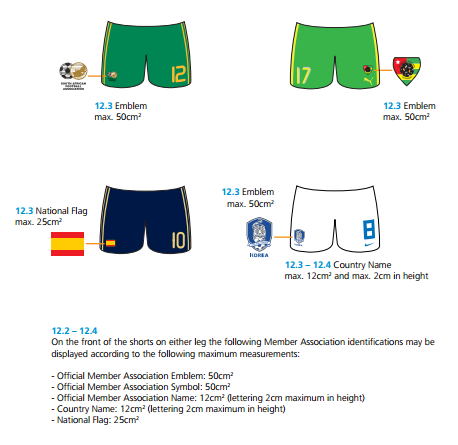 Socks must display the same two forms of member identification, to be chosen among the member flag, emblem, or name. 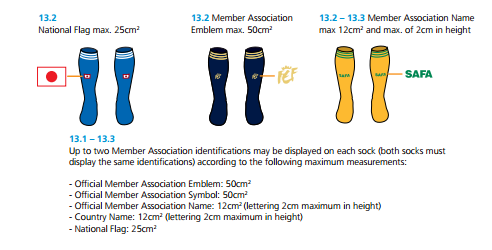 The reigning champion of the FIFA World Cup must display a champions badge throughout the tournament. In 2014, Spain must wear a specially made badge on the front of the shirt at chest level. The badge measures 80 mm by 55 mm and will be provided by FIFA. 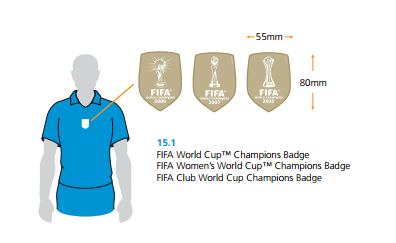 In continuing the theme of past champions, member associations that have won one or more editions of the World Cup may display a five-pointed star(s) on the shirt and/or shorts. The star(s) must be positioned immediately above the member identification. 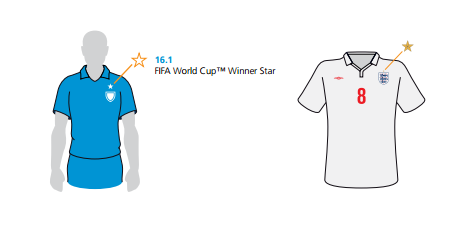 FIFA will also provide two captain's armbands for international play, composed of the colors of the country's flag, but contrasting to the uniform. Free of any manufacturer identification, sponosors, or decorative element, the armband will simply have the word "captain" and FIFA logo. 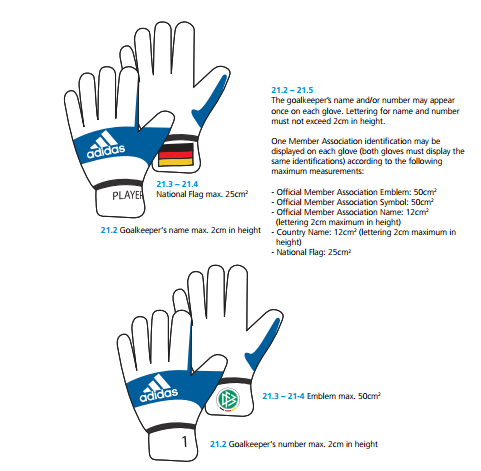 At their discretion, the goalkeeper may also wear a cap of any color, to be affixed with no more than one form of identification, as well as their name. The same goes for any headbands or arm/wristbands that a player may wear. 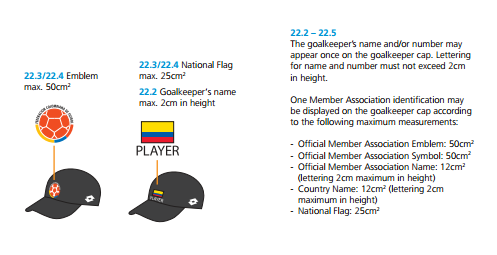 Like member identification logos, manufacturer logos are also subject to regulations. The manufacturer may place its name/wordmark and logo on any equipment item it so chooses, but are only permitted to use it three times throughout the kit. It should be noted that both socks count as one item and shoes are at the player's discretion. The manufacturer logo can be placed in any of the following locations: the bottom of the sleeves, the chest opposite of the member identification logo, the shorts adjacent to the number, and/or the socks. 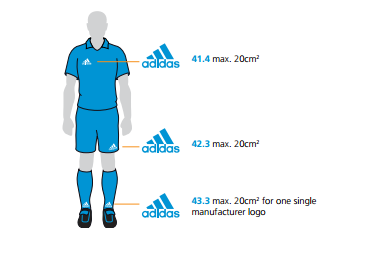 In some cases, such as Adidas' three stripes, a manufacture logo may be incorporated into a strip, which may be placed along the player's side, the cuffs of the sleeve or shorts, and/or the top of the socks. In some instances, a manufacturer may choose to form a repeated pattern of logos to make such a strip. 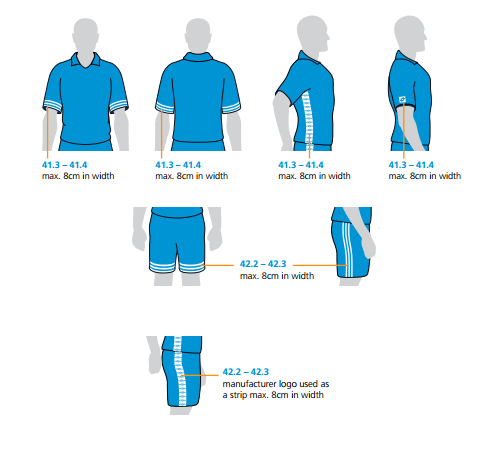 Furthermore, it's not just the players whose look is subject to FIFA's strict rules. Coaches, referees, ball boys, and even the game-used ball must use specific logo placement. If any participating member of the country does not follow these rules, they are subject to a penalty and can be docked points or banned from future tournaments. In a World Cup qualifier ten years ago, Cameroon wore Puma's one-piece uniform, resulting in penalties and FIFA amending regulations to outlaw such designs in the future. To avoid such situations moving forward, FIFA now requires manufacturers to submit all designs one year in advance.