A daily review of the latest uniform news and rumors across the sports landscape.

When both Major League and Minor League Baseball teams take the field on July 4th, they'll be outfitted with red, white, and blue caps. Originally a gesture of patriotism, MLB teams began wearing small American flag patches on the left side of their caps on Independence Day, 2002. This would continue for six seasons, but in an effort to sell more merchandise, MLB and New Era created a series of flag-themed hats to be worn on the national holiday ever since. The caps have steadily evolved, from all blue or red caps to white paneled caps, but this year's installment may be the best yet.

I received a sneak peak of the hats and my sources informed me that on the first Friday in July, each American League team will be wearing a red cap with a blue bill, while all National League teams will don a blue cap with a red bill. The front of the hat will feature an American flag* inside of a slanted star with a white team logo placed on top of it. The MLB caps will be officially unveiled to the public this Friday afternoon, but some minor league teams leaked their designs on social media.

Similarly to the American League teams, the Bowling Green Hot Rods (Class A affiliate of the Tampa Bay Rays) will be wearing the red cap with the blue bill.

Like their National League superiors, the Lowell Spinners (Class A affiliate of the Boston Red Sox) will don the blue cap with the red bill.

Stars and Stripes... should we make this hat? Players would wear 7/1-7/3. Would be available in store. Would you buy? pic.twitter.com/dE9qjmRCu8

*The Toronto Blue Jays will wear a hat featuring a solid red star to signify the Canadian flag.

As part of a season-long celebration of Wrigley Field's 100th anniversary, the Cubs and Marlins wore throwback uniforms on Sunday afternoon. The Cubs were outfitted in duds similar to that of the 1942 squad, while the Marlins sported the uniforms of the Miami Sun Sox. A minor league affiliate of the Dodgers in the 1940s-50s, the Sun Sox won their league championship in 1950 and 1952. 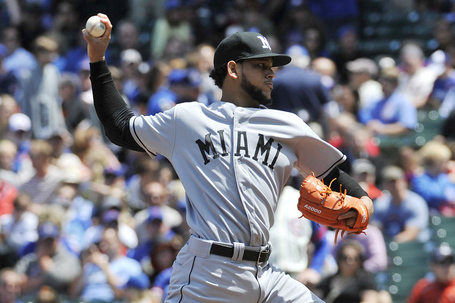 The Cubs, meanwhile, chose to honor the 1942 team because that was the last year that the franchise wore vest uniforms. The vest, which featured a zipper and a blue undershirt, also promoted the "Hale America" fitness campaign with a "Health" patch opposite of the Cubs logo. 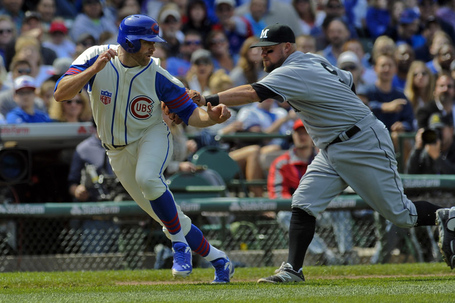 Following the death baseball icon Don Zimmer, the Rays and Mariners wore Brooklyn Dodgers throwback uniforms during a pregame ceremony on Saturday afternoon. Zimmer, who spent 66 years in professional baseball and was the Rays' senior advisor until his death at the age of 83, will continue to be honored by the franchise, as the team will wear a "ZIM" patch on their right sleeves for the remainder of the season. 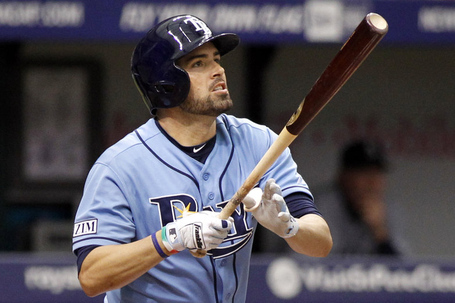 One final note in professional sports: According to the official MLB Media Guide, Major League Baseball has updated its postseason wordmarks. Past iterations of the wordmark and the official World Series logo have used the same fonts, so expect that to continue this year.

With the collegiate baseball season coming to a close and only sixteen teams remaining in the tournament, all eyes are on the chase to Omaha. With each game of the tournament now on national television, each team and its uniform choices will be magnified.

Wearing red, white, and blue uniforms, Vanderbilt booked its second trip to the College World Series with a 12-5 win over Stanford.

Meanwhile, Pepperdine evened its series with TCU on Sunday wearing digital camouflage uniforms. The Waves have worn a wide array of uniforms this season, including a Houston Astros "Tequilla Sunrise" replica. No word on what their plan is for Monday's rubber match.

Waves crash the party in Fort Worth! @PeppBaseball knocks off TCU 3-2 to force a game 3 tomorrow. #RoadToOmaha pic.twitter.com/nAXblRhW7b

There will be a couple visual changes on the gridiron in Minnesota and at Oklahoma State this season, as both the Golden Gophers and Cowboys installed new turf in the past week. As TCF Bank Stadium prepares to host both the Gophers and NFL's Vikings, the sewn, colored turf had to be removed and replaced with a solid green, heated playing surface that is able to be painted depending on which team is using the field.

A new era of painting begins at TCF Bank Stadium for @GopherFootball and @Vikings pic.twitter.com/AEKBFQZnvk

In Stillwater, the Cowboys removed the old turf, which featured a slanted wordmark in the endzone, in favor of a bolder look. The new Big XII logo has also been placed at the 25-yard-lines.

Another endzone look at the new turf. #okstate pic.twitter.com/AeFoTnmjm7

Although pictures of the new Big XII logo on uniforms have been floating around for some time, the new ACC logo has not been seen other than in print until now. 2016 running back recruit, and son of boxing legend Evander, Elijah Holyfield gave us the first view of the new ACC logo on a uniform during his visit to Louisville this past weekend.

And finally, a uniform assessment wouldn't be complete without the Oregon Ducks. Likely to be paired with the uniform the team wore in its Alamo Bowl win, Ducks wide receiver Daryle Hawkins posted a photo of himself to Instagram wearing a candy apple green helmet. This won't be the last time the Ducks are mentioned here, as the team will unveil its full Nike "Mach Speed" set later this summer.

To stay on top of the latest uniform and logo news and rumors, make sure to follow @SBNUniforms on Twitter. If we missed anything or if you have a uniform/logo tip, shoot an email to uniformnation@landgrantholyland.com.