The National Basketball Association introduced the logo for the 2015 All-Star Game in New York City. A nod to the public transportation signs that litter the city, the logo is inspired by the subway lines that connect the five boroughs of New York.

Two of those boroughs, Brooklyn and Manhattan, will play host to All-Star Weekend, as Brooklyn will host the weekend's festivities - which include the Slam Dunk and Three-Point Contests - at the Barclays Center, while the actual game will take place at the world-famous Madison Square Garden.

This marks the fifth time that New York City will host the event, but the first time ever that two teams will share host duties. The logo also pays homage to both host teams, with the abbreviations "BKN" and "NYK" placed above circles that utilize each teams' respective colors and mark the date.

The 64th NBA All-Star Game will take place on Sunday, February 15th, 2015, and will be televised by TNT. 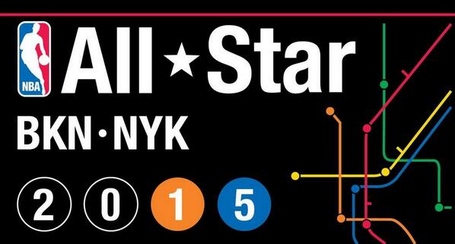