Under Armour leaks new football uniforms for Utah and Navy?

Under Armour may have leaked new uniforms for the Utah Utes and the Naval Academy.

Share All sharing options for: Under Armour leaks new football uniforms for Utah and Navy?

The University of Utah football and men's basketball programs will don new uniforms during the upcoming season, and Under Armour may have given fans a first look at new duds.

Assistant Athletics Director Liz Abel previously noted that the uniforms would no longer feature stripes or the topographical lines that were emphasized in the previous uniforms. Instead of sublimated lines to replicate the state's mountain landscape, these leaked images, via Amazon, feature actual mountains on the sleeves. Unfortunately, we don't have images of the team's pants, which we can only assume shares the same imagery of mountains. 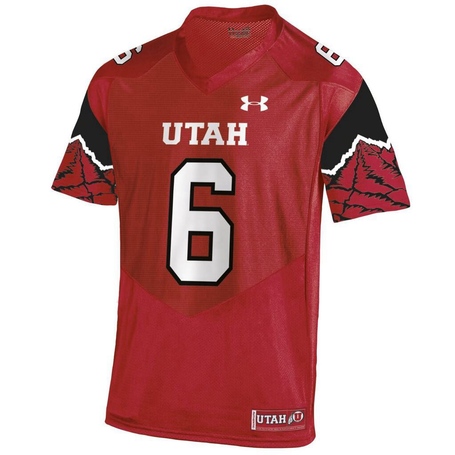 Update: While many sources in - and surrounding - the University of Utah could not confirm or deny the legitimacy of the rumored uniforms, many pictures of retail versions have been taken inside apparel stores surrounding the Salt Lake City campus.

The picture below, showing the rumored red jersey and never-before-seen black jersey, was taken at Sheels, the largest sporting goods store in Utah. I reached out to the department store, who confirmed that they are indeed screen-printed replicas of the uniforms to be worn by the Utes this coming fall.

In addition, there also looks to be new uniforms for the Naval Academy, as the Midshipmen signed a ten-year deal with Under Armour last November after being outfitted by Nike since 2002. Despite the change in apparel manufacturers, the team can still wear the helmet that was paired with its Pro Combat set, as it was produced by HGI and is a separate entity from Nike, but the standard gold lid is still expected to be the team's customary helmet.

When the Midshipmen take the field on August 30 against Ohio State, their new uniforms will raise questions among non-military fans. Similarly to Northwestern's uniforms, Navy's jersey will feature horizontal stripes across the chest, signifying an internally achieved rank at the Naval Academy: 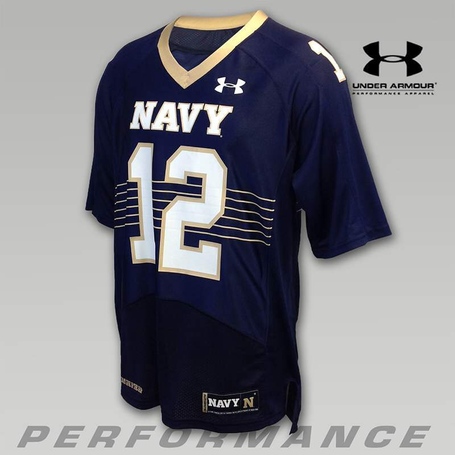 The six stripes in the jersey above signifies a Captain's rank in the Naval Academy, so I wouldn't put it past Under Armour to go all out and assign stripes to each individual player based on academic year or rank in Annapolis. The Midshipmen's road uniform will follow the same template, but was not available for purchase at ArmedForcesGear.com.